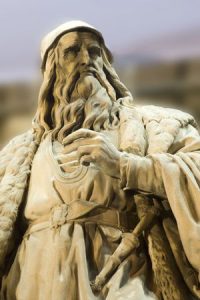 Art historians have long suspected that although Leonardo da Vinci primarily used his left hand, he was in fact ambidextrous, meaning that he could write, draw and paint with both hands.

Now, researchers at Florence’s Uffizi Gallery report that they have found evidence to prove this theory, based on historic handwriting analysis. The research team studied da Vinci’s earliest surviving work, a drawing of the Arno River completed in 1473 when the artist was just 21.

The drawing has two inscriptions: one on the front and one on the back. The inscription on the front is written in da Vinci’s signature “mirror writing” from right to left. Art historians have theorized that he wrote this way using his left hand to avoid smudging the ink.

However, the inscription on the back of the drawing is written in the more ordinary left-to-right style, and the researchers believe that da Vinci used his right hand to write it.

While the two forms of writing display some differences due to the use of different hands, they have numerous key features in common, which indicate that they were both written by Leonardo.

According to art historian Cecilia Frosinini, “Leonardo was born left-handed, but he was ‘reeducated’ at a very early age to use the right hand. From an observation of his handwriting, including the inscriptions on this drawing, it is clear that his writing as a right-hander was both cultivated and well-formed.”

However, later in life da Vinci may have lost the use of his right hand due to nerve damage.

At Drexler Document Laboratory, we’re proud to operate full-service laboratory offering experienced forensic document and handwriting analysis for both individuals and businesses involved in civil or criminal investigations. To learn more, feel free to give us a call at our toll-free number or contact us online today!