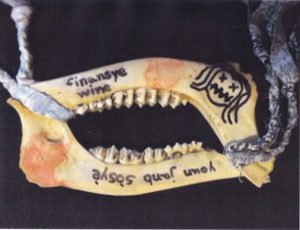 As a forensic document examiner, I’m sometimes tasked with verifying the identity of a person who would rather remain anonymous. In 2016, for example, the owner of a small bar in South Central Alabama contacted me after receiving a series of threatening phone calls, text messages and emails from a disgruntled patron.

The proprietor of the establish suspected that the culprit might be a pair of brothers who had recently been banned from the property for harassing other patrons and exhibiting violent drunken behavior. My client began receiving the threatening messages soon after these brothers were permanently ejected from the bar.

After a few months, when their threatening messages failed to produce the desired result, the suspected culprits decided to up the ante. At this point, my client received a very sinister-looking jawbone in the mail, which was inscribed with cryptic messages and bound with torn scraps of childrens’ pajamas. This jawbone gave me the handwriting sample I needed to determine whether or not the brothers were behind this disturbing pattern of harassment.

By comparing the inscriptions on the bone to limited handwriting standards from the two brothers, I was able to eliminate the younger brother as the culprit. There are indications, however, that the older brother was a likely source of the writing on the jawbone. Based on this evidence, it’s likely that my client’s suspicions were quite correct.

Interested in learning more about how forensic handwriting analysis can help you get to the bottom of a difficult case? Give Drexler Document Lab a call or contact us online today to get started.