If you’ve been following my blog, you may remember that I was once tasked with attempting to identify the author of an anonymous letter that sparked a major scandal involving two high-profile American political figures during the 19th century. These historical investigations are always interesting, and they occasionally involve some very well-known individuals.

Several years ago, for example, I was approached by a client who asked me to confirm the authorship of two letters that had purportedly been signed by George Washington.

This investigation ultimately sought to answer two key questions: Were the signatures authentic, and was Washington the author of the letters as well? I began by studying the signatures and comparing them to known examples of George Washington’s signature. 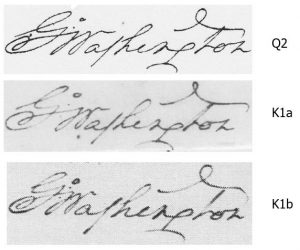 Based on the overwhelming consistencies between the signatures in question and known George Washington signatures, I concluded that there is a strong probability that the letters were, in fact, signed by our nation’s first president. Whether or not the letters were actually authored by him, however, is a matter of debate.

Washington was not known for being a very skilled penman, and was even so embarrassed by his handwriting that he would sometimes spend hours practicing his penmanship and re-writing old documents that he was dissatisfied with. Based on this historical detail and my analysis of the handwriting in the two letters, George Washington could not be the author of the full text of these documents.

Instead, it’s possible that the letters were written by an aide and then signed by Washington after the fact. I then attempted to identify the author of the document text by comparing the text to other historic documents handwritten by Thomas Jefferson, John Adams, Alexander Hamilton and a few known penmen employed by Hamilton. Comparisons revealed that all but one of Hamilton’s penmen could be eliminated, but he could not be identified. Unfortunately, to this date the true penmen remains a mystery.